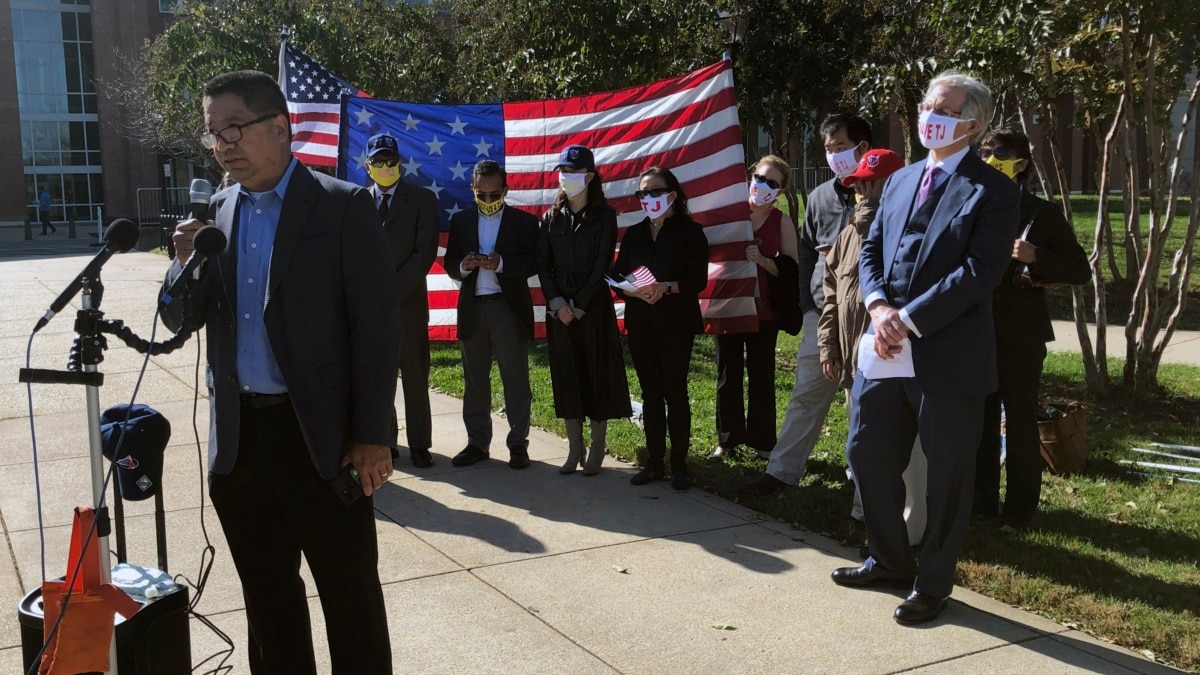 A discrimination case involving Asian Americans at a top public high school in the state of Virginia is moving ahead.

A federal judge in late May ruled that a parents’ group can dispute the admissions policy of the high school in court. The group says the new admissions policy is meant to limit the number of ethnically Asian students at the school.

Thomas Jefferson High School for Science and Technology, commonly called TJ, is in Alexandria, Virginia. It is part of the Fairfax County School system. TJ was rated the best public high school in America last month by the magazine U.S. News and World Report.

However, the school accepts very few Black and Hispanic students. This year, a small percentage of students at TJ are Black or Hispanic. However, about 70 percent of students are identified as Asian. Government information shows that Asians make up about 20 percent of the population of Fairfax County.

Last year, the Fairfax County School Board changed the admissions process at the school. Before the change, acceptance to the highly competitive school was based mainly on grades and test scores.

The board said it decided to change the process to judge students holistically. That means to consider many different qualities of a person rather than a few. A difficult admissions test is no longer required. Critics of the earlier system argued that it gave an advantage to families that could pay for test preparation classes.

Now, any eighth grade student with a 3.5 grade point average or above can apply to TJ. Instead of an exam, students write an essay. Students are judged based on a “portrait,” which considers things like a student’s economic situation and whether they come from a home where English is not the main language. Seats are also guaranteed to the top 1.5 percent of students at any of the county’s middle schools.

Fairfax Schools Superintendent Scott Brabrand led the push for the changes at the high school. Officials say the new admissions policies are not affected by race.

“We have heard from many members of the TJ community—current and former—who have raised concerns about diversity at the school,” Brabrand said to the board last year. “TJ must reflect the diversity…of Fairfax County Public Schools.”

A group, including several Asian families, brought legal action soon after the school board announced the changes. The case argues that the new admissions rules are meant to lower the number of Asian students. The group calls itself the Coalition for TJ. It is receiving legal help from the Pacific Legal Foundation, PLF, a nonprofit legal organization.

PLF lawyer Erin Wilcox is representing the families. She said in a statement, “TJ’s attempts at racial balancing are not only illegal, but they also harm the children they’re supposedly trying to help.” She said the school board is barred from choosing who can attend public school based on a person’s race or ethnic group.

The TJ admissions legal case is similar to debates at other schools around the country. Often, there are few Black and Hispanic students at top public high schools. Students that attend these competitive schools are more likely to do well on SATs and other exams and attend good universities.

Stuyvesant High School is a top public high school in New York City. Similar to TJ, almost three of four students at Stuyvesant are Asian. The New York Times reported that only eight Black students out of 759 were admitted into the first-year class for 2021.

A study published last year said that diversity can be good for students, both educationally and socially. Research from the Economic Policy Institute in Washington, D.C., suggests that Black students perform better on standardized tests if they go to schools with more white students.

But in the Virginia case, parents argue that the school district’s policies to support racial minorities hurt a racial minority—Asian Americans.

The debate may partly be answered in the U.S. Supreme Court before the end of next year. In a case brought in 2014, a group called Students for Fair Admissions wants Harvard University to remove race as a factor in college admissions. Colleges and universities have used race and ethnicity as one of many factors in deciding who to accept.

The group says that Harvard’s admissions policies discriminate against Asian students. Asians make up 24 percent of the Harvard student population.

Harvard won the case in federal court in 2019 and again in an appeals court in 2020. But legal experts say the Supreme Court is likely to have its own ruling. While the case concerns a private university, Wilcox, the Coalition for TJ lawyer, told The Associated Press that a decision by the Supreme Court could affect the TJ case. The Pacific Legal Foundation supports Students for Fair Admissions’ side in that legal case.

Asra Nomani is a TJ parent who has led opposition to the admissions changes. She said at a press conference that the new policies are part of growing “racism against Asian Americans.” She said many of the TJ families are recent immigrants who came to America for a better life.

“These families never could have imagined they would face such injustice in America,” she said.

Dan Novak wrote this story with additional reporting from The Associated Press. Mario Ritter, Jr. was the editor.

advantage — n. something (such as a good position or condition) that helps to make someone or something better or more likely to succeed than others

portrait— n. a detailed description of something or someone

apply –v. to ask for something formally, such as a job or admission to a school, usually in writing

standardized –adj. describing something that has been made the same for everyone who uses it

factor –n. something that helps produce or influence a result; a fact that influences a decision

How Will Colleges Evaluate Students during Pandemic?

Many American Students Decide to not Take Standardized Tests

Some US Students Choose Career Training over College

Until, Unless का Use | Use of Until and Unless Conjunctions...

How to play a kahoot as a challenge