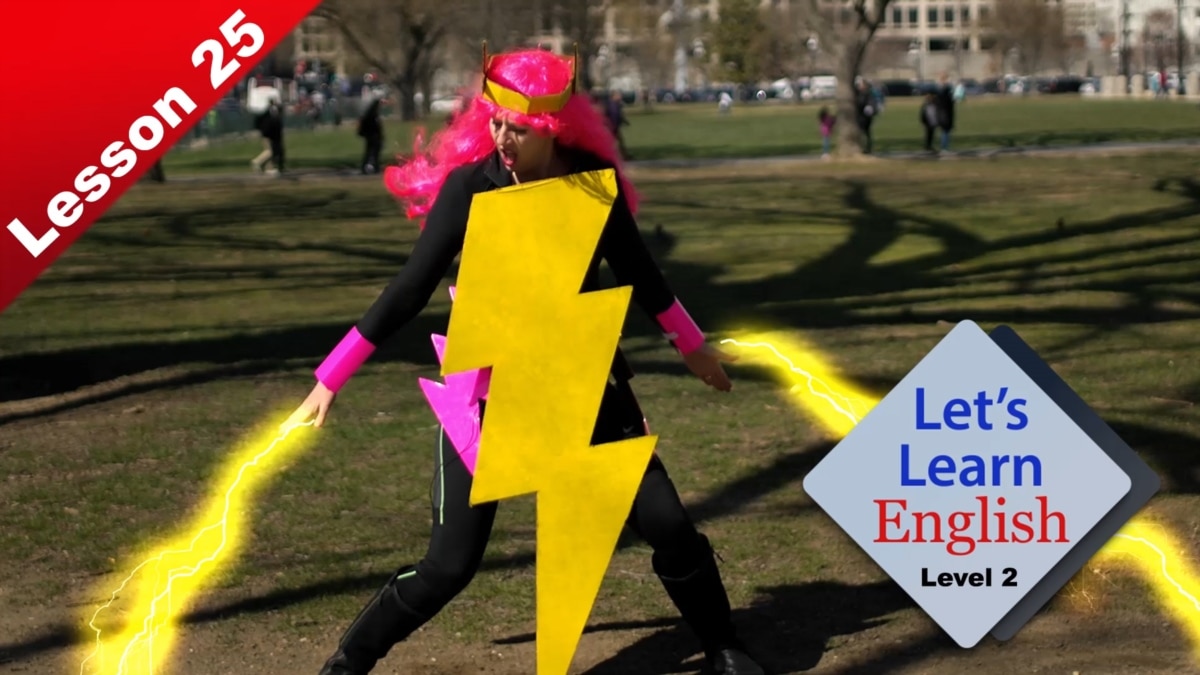 ANNOUNCER: When last we saw Anna, she had made a new friend. And they had been talking about superheroes for a while when suddenly Anna became Lightning Bolt Lady!

ANNOUNCER: She tried to find her superpowers. But it did not go well.

ANNOUNCER: She had been walking into that wall for about 15 minutes when she had a great idea.

LIGHTNING BOLT LADY: I just had a great idea!

ANNOUNCER: I can’t wait to hear this one! But first, let’s talk about grammar.

ANNOUNCER: Professor Bot is on vacation this week. I’m the announcer. So, I’m going to tell you about the past perfect continuous.

ANNOUNCER: We use this verb tense to show that an action started in the past and continued to another time or action in the past.

ANNOUNCER: For example, I said, “She had been walking into that wall for about 15 minutes when she had a great idea.”

ANNOUNCER: Had been walking is the past perfect continuous of the verb walk. It’s had been plus the -ing form of the verb.

ANNOUNCER: You’ll hear me use this verb tense a few more times today.

LIGHTNING BOLT LADY: If I want to know my superpowers, I’ll need to learn about lightning!

ANNOUNCER: So, she read many books about lightning.

(She tells this to a person and he slowly moves away.)

LIGHTNING BOLT LADY: Lightning is really fast and I like speed walking. So, maybe one of my superpowers is super-speed walking! (to stranger) Bye!

(She begins to super-speed walk.)

LIGHTNING BOLT LADY: Check! Super-speed walking is definitely one of my superpowers.

(She puts her hand up and lightning bolts shoot from her fingers.)

LIGHTNING BOLT LADY: Wow! I can charge a lot of batteries with this superpower!

ANNOUNCER: She had been looking for hours for someone to help when she found her chance.

WOMAN: Hello? Hello? I’m sorry. I’m going to have to call you back. My phone is dying.

LIGHTNING BOLT LADY: Excuse me, I can charge your phone.

(She takes the woman’s phone and shoots it with a lightning bolt. But it turns into ashes. Then, she gives the woman lots of money and smiles and says goodbye.)

ANNOUNCER: She had been practicing her superpowers all day. Suddenly, she heard a terrible sound – a child’s disappointment.

ANNOUNCER: These children tried to light a fire for over an hour. But then, they gave up.

LIGHTNING BOLT LADY: (to YOUNG MAN:) We meet again. And guess what: I found my superpowers.

CHILD: Well, we need a fire to toast the marshmallows to make S’mores.

LIGHTNING BOLT LADY: I can help.

YOUNG MAN: We don’t need a super-speed walker but thanks!

LIGHTNING BOLT LADY: Super-speed walking is just one of my superpowers. I can also do this!

(She tries to use her lightning bolts but it doesn’t go well.)

LIGHTNING BOLT LADY: Sorry! Let me do it again.

(She lights the fire with her lightning bolts.)

LIGHTNING BOLT LADY: You’re welcome. But you don’t have enough firewood. Using my super-speed walking, I will get more.

(She super-speed walks around to get firewood.)

LIGHTNING BOLT LADY: Not a chance! There’s not a cloud in the …

YOUNG MAN: It’s starting to rain. Do you want to go inside and eat some S’mores?

ANNA: You read my mind.

ANNA: You know, I thought mind reading would be one of my superpowers. But it wasn’t.

CHILD: That’d be a cool superpower. But I’d rather be able to talk to animals.

CHILD: That would be a cool superpower.

ash – n. the soft gray powder that remains after something, such as wood, has been completely burned and destroyed by fire
average – adj. a number that is calculated by adding quantities together and then dividing the total by the number of quantities
battery – n. a device that is placed inside a machine (such as a clock, toy, or car) to supply it with electricity
cause – v. something or someone that makes something happen or exist
charge – v. to give an amount of electricity to something
cloud – n. a white or gray mass in the sky that is made of many very small drops of water
definitely – adv. without doubt
disappointment – n. the state of feeling of being disappointed
firewood – n. wood used to make fire
give up – phrasal verb. to stop an activity or effort
marshmallow — a soft, white, sweet food made of sugar and eggs
million – n. the number 1,000,000
not a chance – expression. there is no possibility
second – n. a unit of time that is equal to ¹/₆₀ of a minute
s’mores – n. a sweet snack consisting of a chocolate bar and toasted marshmallows sandwiched between graham crackers
strike – n. the act of hitting something with force
terrible – adj. very shocking and upsetting
volt – n. a unit for measuring the force of an electrical current

First, read about the past perfect continuous verb tense below. Then, write two or three sentences in the Comments section about an action that started in the past and continued to another time or action.

Be sure to use past perfect continuous in each sentence!

For example: They had been studying English for two years before they began school in Washington, D.C.

We use the past perfect continuous verb tense in two ways:

To show that something caused something else in the past

Notice that, with the past perfect continuous, we often shorten the word had with personal pronouns: I’d / you’d / he’d / she’d / we’d / they’d.

How well do you know the grammar from Level 2? Test yourself!

In Lesson 25, you will see examples of grammar that you have learned in Level 2. Look for sentences in Lesson 25 with:

See how well you understand this lesson by taking a listening quiz. Play each short video, then choose the best answer.​

Download the VOA Learning English Word Book for a dictionary of the words we use on this website.

Send us an email if you have comments on this course or questions.

Let us know what you think about this lesson. Send us an email or write to us in the Comments section below or on our Facebook page.

Lesson 28: For the Birds

Regular and Irregular Verbs | Verbs Forms in English Grammar in...

Playing Kahoot on a Chromebook