Noun clauses are subordinate clauses that act as nouns. Gee, that seemed obvious! 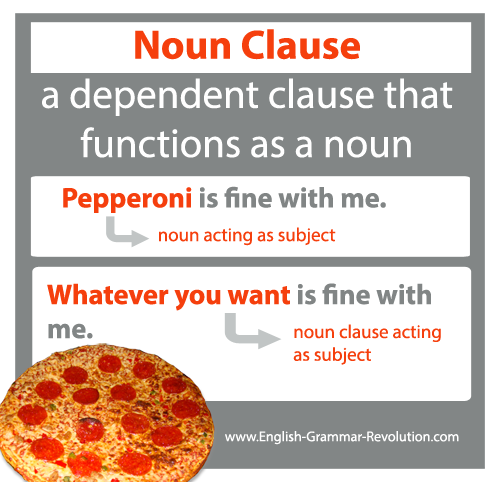 They can perform any of the noun jobs. We’ll explore them acting as subjects, direct objects, objects of the preposition, and predicate nouns.

I’ll show you what I mean.

We’ll go through each of those noun jobs and you’ll see what it looks like to have a whole clause acting as a noun.

A clause is a group of words with a subject and a verb. Subordinate clauses act as single parts of speech and are attached to independent clauses.

Subjects tell us whom or what a sentence is about, right? Right!

Candy is the simple subject in that sentence. It is one word acting as the subject. Now, check this out.

Whatever you want is fine with me.

Here is an example of how you would diagram a noun clause acting as the subject.

A noun can also be a direct object. Direct objects receive the action of the verb. They are only used with transitive active verbs.

Can you tell me the time?

Time is the direct object in that sentence. It is one noun doing a noun job.

Can you tell me when it is time for dinner?

When it is time for dinner is now acting as the direct object. The whole clause is performing one function.

Let’s see if when it is time for dinner is really a noun clause. Does it have a subject and a verb? Yes. (it & is)

Is it performing the job of a noun? Yes. It’s the direct object of the verb tell.

Is it a subordinate clause? Yes. It does not express a complete thought.

Here is an example of how you would diagram a noun clause acting as the direct object.

Here’s a quotation from The Little Mermaid. It contains two noun clauses.

The prince asked who she was and how she came there.

She looked at him tenderly and with a sad expression in her dark blue eyes but could not speak. 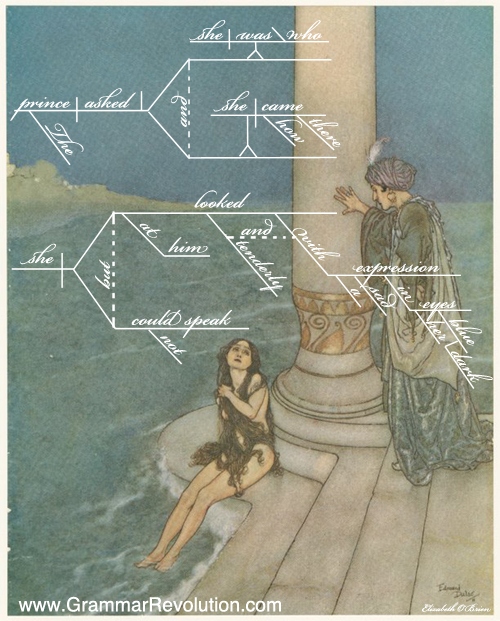 If you find yourself wondering how to diagram a direct quotation of someone’s speech or writing, (direct speech) here’s the answer!

Many times the person’s quotation is a complete sentence.

I feel sleepy is a noun clause acting as the direct object of the verb said. 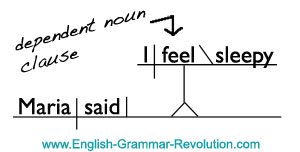 Acting As Objects of the Preposition

As you might have guessed, an object of the preposition is another noun job.

Read this page about prepositional phrases if you need to brush up on prepositions.

Tom is a noun acting as the object of the preposition in.

It can’t stand alone, so we know it is a subordinate clause. 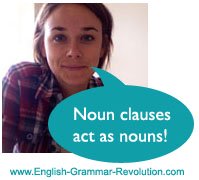 We’ve come to the last noun job that we’ll discuss here. It has been waiting patiently while you read about subjects, direct objects, and objects of the prepositions.

This last job is, of course, a predicate noun.

If you want to sound smarter, you can also call these predicate nominatives.

Predicate nouns are the nouns that come after linking verbs. They rename the subject.

Pie is the predicate noun. It is one noun performing a noun job.

Happiness is whatever just came out of the oven.

Whatever just came out of the oven is a noun clause performing the job of predicate noun.

It has a subject (whatever) and a verb (came), so we know it is a clause.

It does not express a complete thought, so it’s a subordinate clause!

(Hmm … pie sounds pretty yummy. I must be hungry as I write this!)

What Are Subordinate Clauses? – The Blue Book of Grammar and Punctuation

Dependent and Independent Clauses – The Blue Book of Grammar and Punctuation

Examples of Direct Objects – The Blue Book of Grammar and Punctuation

SINCE और FOR का Difference | Use of Since and For...