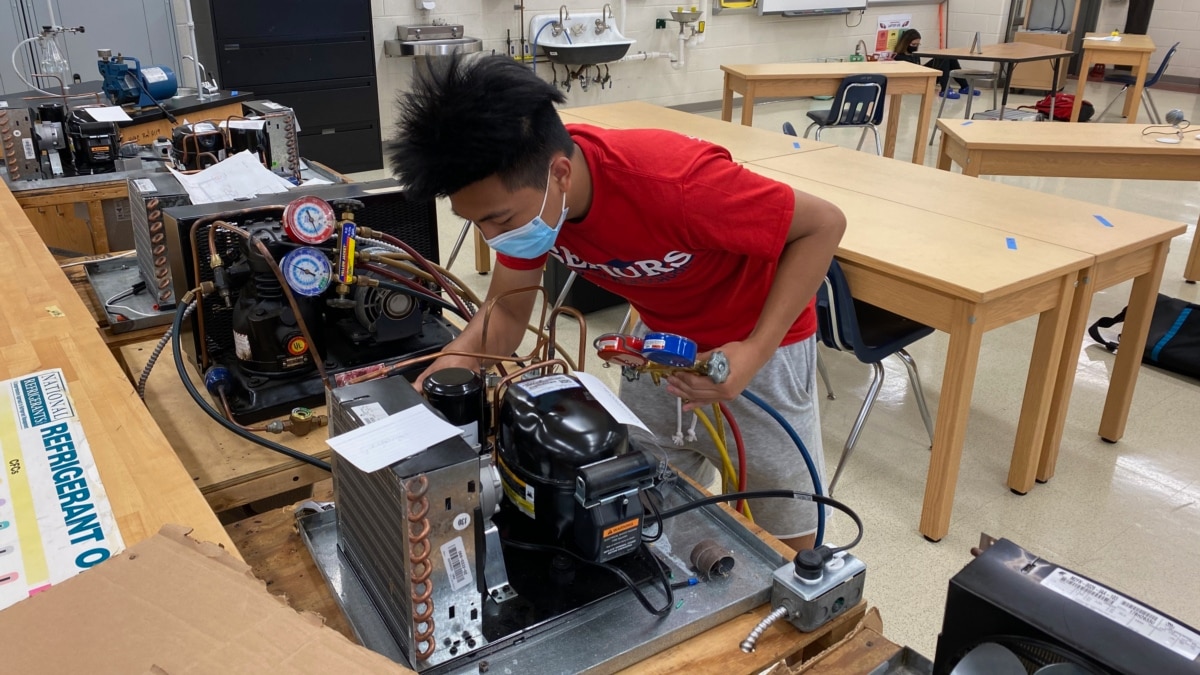 One morning in June, A.J. Muir, an 18-year-old high school student from Springfield, Virginia, was taking a test in an empty classroom.

It was not an English or math test. Instead, it was a test that recognized his skills in keeping computer networks safe – a field called cybersecurity. Muir is going to college this autumn. But he possibly could get a good job tomorrow after passing the test.

Muir had prepared for the test by taking classes at Edison Academy. The school is one of the career and technical education (CTE) centers in Fairfax County. Students at the centers take traditional classes such as English and history in addition to technical ones like cybersecurity and information technology.

If President Joe Biden’s $2.3 trillion infrastructure plan is approved by the U.S. Congress, there will be a strong demand for CTE students like Muir. Companies will need people who know how to work with metal and electricity. They will need workers to build parts for roads, bridges and places to charge batteries of electric cars.

A 2017 report from the Georgetown University Center on Education and the Workforce showed that there are 30 million jobs in the U.S. paying $55,000 per year that do not require a college degree. The jobs require the kind of education that comes from the CTE classes.

Right now, there are not enough adults in the U.S. who know how to do those jobs. And workers holding the jobs are getting close to the end of their careers. A 2019 publication from the U.S. Department of Education noted nearly 80 percent of public high school students take at least one CTE class. But after that one class, many students do not continue.

The consulting firm Deloitte and The Manufacturing Institute called it a “skills gap” in the U.S. economy in their May report.

Joseph Wolfe teaches electrical work, construction and engineering at Edison Academy. Most students who take his classes do not go straight to college.

“We’re not anti-college. We just provide an alternate path to a traditional college route.”

People who want to work as electricians need up to four years of training to get started. But the students who leave Wolfe’s class are already one year ahead. They can work and study their trade at the same time.

Wolfe added that some of his former students with more experience earn close to $100,000 per year.

The U.S. government started paying for career and technical training as early as 1917. It is sometimes called vocational training. In those days, students learned to work with wood and metal and were able to get well-paying jobs without going to college.

Over time, students were told that a good future required a four-year college degree. In many cases, that is still true. But Muir is part of a new group of American students who are hearing a different message.

“College is great, but it comes at a cost.”

A four-year degree from a private university in the U.S. can easily cost over $100,000. At the end of the four years, students may have more knowledge, but they are not necessarily ready to join the workforce.

Spending less money, students can learn about information technology, nursing, or cybersecurity at community colleges. They can also learn to fix vehicles or cook in a restaurant. However, it might take them one or two years to gain the skills Muir and other students learned in high school.

Other countries have similar training programs for young people. And some may be better prepared for economic changes than the U.S.

A 2018 report by World Education News and Reviews said Germany had over 1 million students enrolled in career training classes in 2017. About half of all workers in Germany in 2016 had some kind of career training. And German people see this kind of training as a common path to success.

Teachers and administrators at CTE schools are now working to promote job training to students and their parents. They said it helps both students who want more out of high school and those who struggle in traditional classes.

Monica Bentley is the administrator for Edison Academy. She started her job in 2020.

“I’m actually just blown away with how many students … even during a pandemic, have received certifications,” she said. “I’m really looking forward to next year when I can see it in full force.”

Quiz – Some US Students Choose Career Training over College

infrastructure – n. the basic equipment and structures (such as roads and bridges) that are needed for a country, region, or organization to function properly

construction– n. the business of building things (such as houses or roads)

alternate –adj. other than the usual

route– n. a way of achieving or doing something

vocational– n. relating to the special skills, training, etc., that you need for a particular job or occupation

nursing– n. the job of taking care of people who are sick, injured, or old

promote– v. to make people aware of (something, such as a new product) through advertising : to make (something) more popular, well-known, etc.

blow away– v. to impress (someone) in a very strong and favorable way

Quiz – Some US Students Choose Career Training over College

Some US Students Choose Career Training over College

Calls for Free Community College as Fewer Go During Pandemic

Learn German – German in Three Minutes – Do You Speak...