It’s time for some relationship advice! No, I’m not talking about romantic relationships. APA Style doesn’t cover that sort of thing (although, we do suggest that you never use et al. when writing to your one true love). But, the Publication Manual, Sixth Edition does cover the relationship between tables and figures and the text, including how to discuss and cite them.

Discussing Tables and Figures in Text 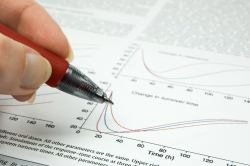 In my last post on what qualifies as tables and figures in APA Style, I mentioned that these graphical displays are useful for presenting information that would be difficult to interpret if described in narrative format, such as large amounts of numerical data. However, some APA Style users incorrectly duplicate data both in text and in a table or a figure. In 2010, Onwuegbuzie, Combs, Slate, and Frels identified “improperly prepared tables and figures,” which includes “repeating information in the text” (p. xii), as the sixth most common APA Style error.

The Publication Manual states that effective tables and figures supplement or augment the text rather than duplicate it (see pp. 130 and 152). This does not mean that there can’t be any overlap between tables, figures, and the text. In fact, the Publication Manual stresses that key pieces of information from a table or a figure can also be highlighted in the text.

Meta-analyses nicely illustrate the relation between visual displays of data and the main text. They often contain tables and figures (e.g., forest plots) that summarize data from multiple studies, including sample sizes, effect sizes, standard deviations, statistical significance, and so forth. These data give readers important contextual information about the studies. Presenting them in tables and/or figures makes the data much easier to digest than if they were described in narrative format. In the text, authors can then highlight and analyze specific data that stand out from the rest, such as pointing out that one study found a much greater effect for a given treatment approach than any other study and explaining why that might be the case.

Citing Tables and Figures in Text

When citing a table or a figure in text, refer to it by its number, such as “Table 3” or “Figure 2.” Do not refer to it by its position relative to the text (e.g., “the figure below”) or its page number (e.g., “the table on page 12”); these will change when your paper is typeset, assuming you are writing a draft manuscript that will eventually be published.

The APA Style guidelines in the Publication Manual were written with draft journal articles in mind, so they do not address how to cite figures and tables in other contexts, such as books and dissertations that are divided into chapters. Even so, these guidelines can be adapted to meet your needs (e.g., if you are writing a dissertation, follow your school’s dissertation guidelines).

The Seventh Edition of the Publication Manual Is Available for Preorder!

Introducing the 7th Edition of the Publication Manual

The Ultimate Guide to Paragraphs

How to tell the time

The Seventh Edition of the Publication Manual Is Available for Preorder!

Introducing the 7th Edition of the Publication Manual

The Ultimate Guide to Paragraphs

How to tell the time