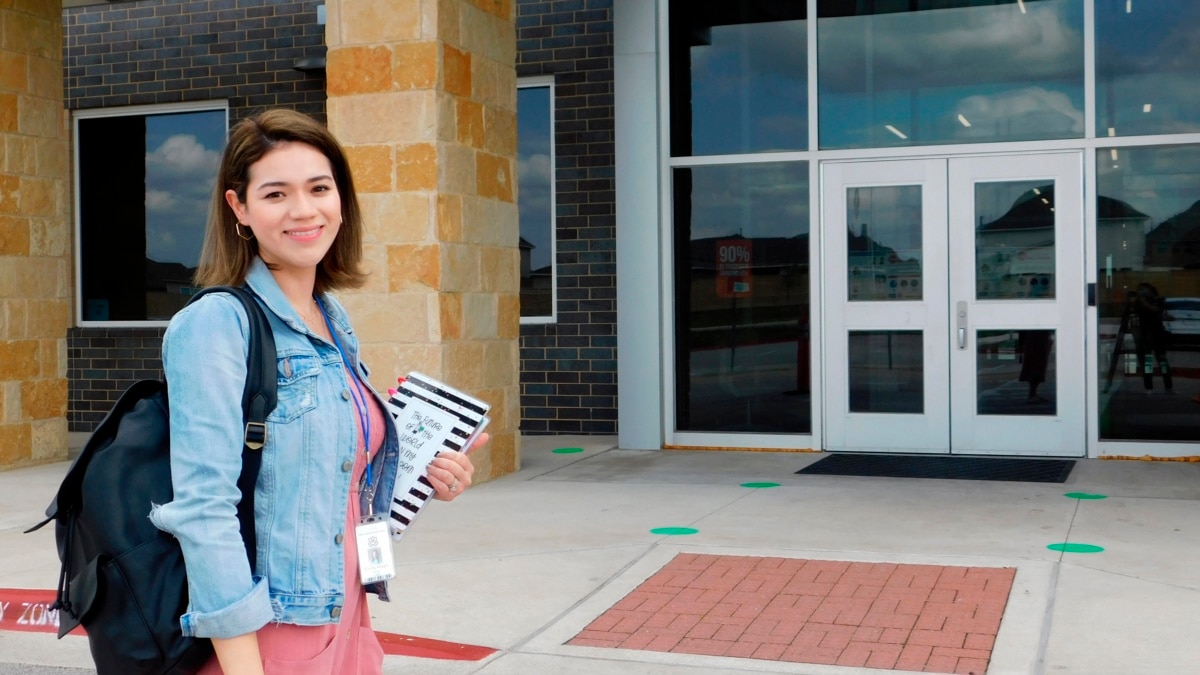 Ana Saul Romero has seen many changes in teaching methods, testing, and technology during her forty years as a teacher. But this year, she said, has given her a lifetime’s worth of changes.

In her first-grade class in Manor, Texas, just outside of Austin, only 12 students are inside the classroom. The other half of the class join in from home by video. Romero now stands behind a clear divider working with a pointer, a laptop, and a few other technologies to teach her students.

Romero said, “it is difficult with the technology, and I have learned more, but it is not enough, it is never enough.” She said she is from an older generation and she misses the daily, in-person connections with her students.

First-year teacher Cindy Hipps is Romero’s teaching partner. She said it was like being “introduced to the ring of fire of teaching.” She added, “I feel like a superwoman now.”

This spring marks a year since the coronavirus pandemic shut down schools across the United States. It forced many students, parents, and teachers into virtual classrooms.

As states permitted larger groups to gather, some students have since returned to school. Many schools now use a combination of virtual and in-person instruction in class. And teachers like Romero have to learn new ways of teaching all the students.

Adding to the difficulties, not all students have equal access to internet and technology. There were political and social protests across the country. And many tired educators are wondering if this will be their last school year.

Antoinette Miranda is an Ohio State University professor of school psychology. She is also on the state’s school board and is married to a high school teacher.

She said that educators are dealing with the pandemic’s effects on themselves and their family. They also are trying to support students, some with troubles in school and some without food at home while being separated from friends.

“We talk a lot about the stress on students,” Miranda said, “but I think there’s a tremendous amount of stress on teachers.”

Some people blamed teachers who raised concerns on health and safety for delaying school re-openings. They felt it put pressure on parents. But Miranda thinks “there’s also a renewed respect for teachers… especially parents that had to start teaching their kids at home.”

Andre Spencer is head of the Manor Independent School District where Romero works. He said the schools centered on helping students and teachers during the pandemic. They spent millions to provide every student and teacher the technology for virtual learning, including mobile internet access.

Even before the start of this school year, school supervisors like Spencer were already worried that there would be a shortage of teachers and school workers.

The National Education Association is one of the nation’s largest representatives for teachers. The organization found that more than one in four teachers felt the pandemic increased their plans to retire early or leave the profession.

Randi Weingarten is president of American Federation of Teachers, or AFT, another teacher’s organization. She believes there will be more teachers retiring in the coming months after a year of unknowns, change, and stress. And AFT has started a program to help members who were affected by COVID-19.

But there were other issues that affect teachers, especially teachers of color, this past year. They include national conversations around racial injustice, the presidential election, and the attack on the U.S. Capitol.

Travis Bristol is a professor at the University of California, Berkeley. He suggests schools provide employees time to talk about what they have been through. He says teachers who have been supported in dealing with their own stress will be better able to help students do the same.

Romero, the first-grade teacher in Texas, was considering retiring. But she now looks forward to the new school year.

She said, “We will have the experience of an entire year of trying… That’s what educators do. We try and we fail and we get up and we shake it off and we do it again.”

Acacia Coronado and Kantele Franko reported this story for the Associated Press. Gregory Stachel adapted it for VOA Learning English. Hai Do was the editor.

grade– adj. a level of study that is completed by a student during one year

virtual – adj. existing or occurring on computers or on the Internet

access– n. a way of being able to use or get something

board– n. a group of people who manage or direct a company or organization

stress– n. a state of mental tension and worry caused by problems in your life or work

Virus, Technology, Unrest Make a Stressful Year for US Teachers

A Pandemic Thank You Letter to Teachers

How to improve your English speaking skills | English conversation

How To Make Spam Bots In A Zoom Meeting(Cool Trick)